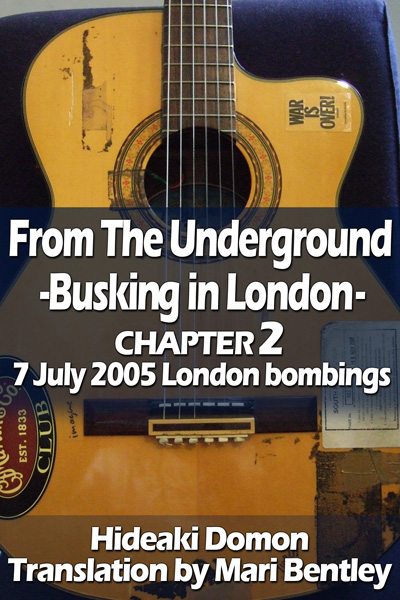 How many people in Japan know what “busking” means? In Britain, busking is “to earn money by singing or playing a musical instrument in public places,” and singers or players are called “buskers.” Busking has thrived in the London Underground for many years, and has become an established part of the music culture. It gives the travelling public a brief and transient moment to unwind and enjoy music; it is also a tourist attraction at the same time.

However, with the modernisation of stations and the increasing number of passengers, busking caused some problems, such as noise, jeopardising passengers’ safety, disputes between buskers, etc. So in 2003 the London Underground Authority introduced a licensing system which requires that anyone wanting to be a busker must pass an audition. Luckily, I was the first Japanese to acquire an official busking licence.

This book is a record of my busking between April and November 2005, but other occurrences and anecdotes that took place before those eight months are also included.

I hope you will enjoy the book – just like you enjoy listening to your favourite music time and time again!

The diary of laughter with the tear of Mr. Domon who was basking in the same time at London Underground as the author “James Bowen” of the books “street cat named a bob”.

From The Underground Busking in London CHAPTER1 Buskers’ Holy Land

From The Underground Busking in London CHAPTER3 We Are The Champions!

From The Underground Busking in London CHAPTER4 Busking of the Soul